Benefits and Methods of Horoscope Matching for Marriage Prediction

I would like to tell you that if you are going to matching the horoscope before love marriage then you should keep in your mind that it has benefited only and there is nothing lost in it.

The presence of Mars in the first, fourth, seventh, eighth, twelfth house of the horoscope reduces the happiness of marriage. This is also known as Manglik Dosh. However, if Manglik Yoga is present in the birth chart of both the boy and the girl, then we do not consider this planetary position an obstacle in marriage happiness. I mean to say that if you are going to have a love marriage and if you match the horoscope before marriage, then you will know whether there is a Manglik defect in your horoscope. If there is a Manglik defect then you may perform the remedy of this defect and avoid the possible troubles.

If you match the horoscope before love marriage, then you will know the following things:

The Method of Horoscope Matching for Marriage Prediction

Vasya – the twelve zodiac signs are divided into five categories, human, four-legged creatures, living creatures in the water, living creatures in the forest and insects. Gemini, Virgo, Libra, Sagittarius, Aquarius sign comes under the human category, Scorpio comes under insect category, Leo sign comes under forest category, Aries, Taurus, Sagittarius four-legged category and Capricorn, Pisces, Cancer falls under the category of living organisms in the water. If the zodiac sign of the boy and the girl is of the same category, then there will be love between them and if their zodiac sign falls under the enemy, then after marriage, they will keep fighting with each other and it is quite possible that later a situation like a divorce will come. Therefore, you should get horoscopes matched before marriage; no doubt, you will be saved from this kind of unpleasant situation.

Tara – It will tell you about the fate of boy and girl after their marriage.

Yoni – Fourteen yonis have been created based on twenty-eight constellations. These fourteen yonis are fourteen types of animals. The yonis of a boy and a girl should be of a friendly animal. The yonis of both boy and girl should not be of an enemy. For example, if the boy’s yoni is a mongoose, then the girl’s yoni should not be a snake. If this happens then marriage should not be done otherwise both will be affected badly after marriage. Therefore, the horoscope must be matched before marriage.

Planetary Friendship – Planets are friends and enemies among themselves too. If the boy or girl’s birth sign or the lunar zodiac sign are friends with each other, then the family life of both will be pleasant, there will be no dispute, quarrel in the house. If the zodiac sign of both boy and girl are hostile to each other, then there will be quarrels in the family every day without any reason. No one wants to fight and dispute in the house every day. Therefore, the horoscope must be matched before the love marriage.

Gana Maitri – Constellations are divided into Dev Gana, Man Gana, Rakshasa Gana. If the marriage takes place in the category of equal Gana, then life after marriage will be good. Dev Gana and Man Gana can also be married among themselves, but Rakshasa Gana should be married in Rakshasa Gana. If it does not happen, then life would be full of sorrow and there will be a lack of marital happiness. Therefore, the horoscope must be matched before the love marriage.

Nadi – Nakshatra is divided into three categories namely Aadi Nadi, Middle Nadi and Antya Nadi. Under no circumstances, the Nadi of the boy and girl should be the same. If the Nadi of a boy and a girl is the same, it is called Nadi defect. In case, marriage is done in a Nadi defect then health problem arises and difficulty arises in getting progeny.  Sometimes a crisis also arises for life. Therefore, the horoscope must be matched before the love marriage.

Conclusion – If you are going to have a love marriage, then I will advise you that you should get your horoscope matching done from a qualified and learned astrologer, there is no harm in it. If there is any defect in your horoscope, then you can perform a remedy. If you need any kind of help in this regard, do not hesitate to contact us. 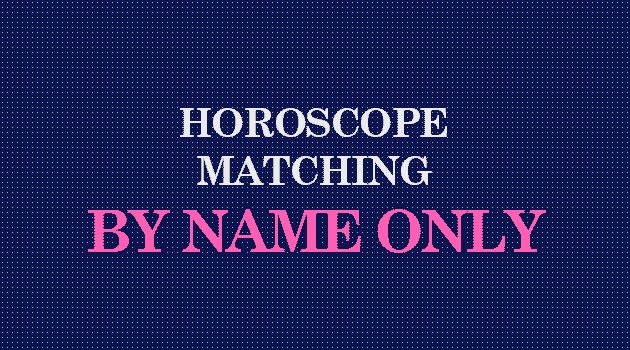 Horoscope Matching by Name only

In olden days when a child was born his parent called Pandit to decide the child’s name according to his time of birth but these days people do not follow the old customs. They decide the Read more…